Can We Remove Birds From a Chimney?

Birds in your chimney can be a real nuisance. They don’t care about or consider your schedule when they start up with their chirping, flapping, scratching, and rustling.

What can be done? Can we humanely remove the birds and prevent them from getting back in? Well, that depends on what type of bird they are.

You see, some birds, like the Osprey and the Chimney Swift, are protected under the “Migratory Bird Treaty Act.” This act is designed for “the protection of migratory birds, birds in danger of extinction, game mammals, and their environment.”

By law, protected birds and their nests cannot be touched during the summer months — which means if your chimney guests are Ospreys or Chimney Swifts, you just have to wait for them to leave and then remove their nests. Otherwise, you risk fines, prison time, and misdemeanor charges.

How do you know if the birds in your chimney are Ospreys or Chimney Swifts? Here’s a quick guide:

Ospreys are very large birds (bigger than geese) in the hawk family. These brown and white birds have long legs, slim bodies, and if you see them with their wings fully spread above you, you’ll notice an M-shaped pattern on their wings.

What do they eat?

They feast on fish, so they’re mostly found near bodies of water — like rivers, ponds, reservoirs estuaries, and saltmarshes.

Ospreys will build their nest on top of the chimney structure, not down inside. Their nests are made of twigs and sticks. Ospreys will typically bring their prey back to their nests, so you may see them eating atop the chimney.

How do you keep Ospreys from coming back and nesting on your chimney each year?

While we can’t remove Ospreys, we can keep them from returning the following year. We do this by installing a Hip & Ridge Cap, with at least an 8/12 pitch on it. This pitch makes it impossible for them to build their nest on your chimney top. 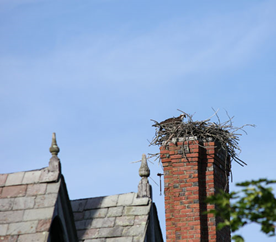 Chimney Swifts are much smaller than Ospreys. They’re gray-brown and have slender, tube or cigar-shaped bodies with long wings and a short tail. It appears that their wings curve slightly backwards when seen from below. Chimney Swifts fall somewhere between a Sparrow and a Robin in terms of size, and their bills are so short, it almost looks like they don’t have one.

What do they eat?

These birds are foragers, so they’re not limited to areas near the water. Instead, you’ll find them near lakes, forests, fields, rivers, cities, and suburbs.

Unlike Ospreys, Chimney Swifts build their nests inside of chimneys and other dim, vertical structures. Their nests are small and built of twigs, but you may not see their nest — you’re more likely to see them going in and out of your chimney.

How do you keep Ospreys from coming back and nesting in your chimney each year?

Any chimney cap will keep Chimney Swifts from coming back and nesting in your chimney again next year, because a cap will completely cover the chimney opening. 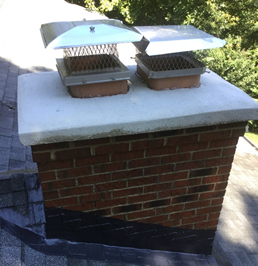 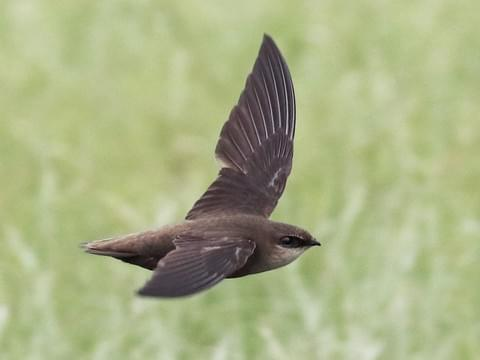 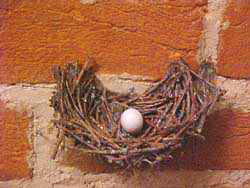 What Can Be Done About Chimney Swift & Osprey Nests in the Chimney?

If you think you may have Ospreys or Chimney Swifts nesting on or in your chimney, here’s what you can do and when:

Have questions? Whether you’d like to have us come out and identify the type of bird nesting in or on your chimney or you want to have a new chimney cap installed to prevent future issues, we’d be happy to help. Just give us a call!

Besides helping you with bird removal, we also do flue liner estimates. Learn all you need to know about our estimate & installation services.