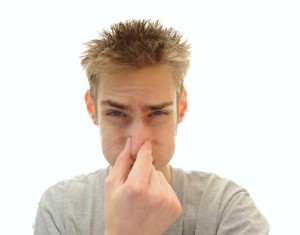 Can’t bear the smell of your fireplace? Have it inspected and cleaned so you can breathe easily in your home.

All fireplaces have some type of odor, but a normal working fireplace will send the smell up and out of the chimney with the draft before it seeps into the home. Fireplace odor problems can be attributed to a variety of different things, the most notable of which come from creosote deposits — a natural byproduct of burning wood — inside your chimney. The odors are usually worse in the summer when the humidity is high, on rainy days, and/or when your air conditioner is running. A visit from a CSIA-certified chimney sweep can help eradicate these unwelcome odors from your home!

Where is that smell coming from?

A fireplace inspection and cleaning is a good first step when a smell issue is involved, as it will remove excess creosote and rule out other common problems that may have caused the smell. It is important to remember, however, that while a thorough cleaning and inspection are helpful, they don’t always take care of the root problem.

Due to the nature of the porous masonry construction inside your chimney, creosote impregnates its smell deep beyond the masonry’s surface. A chimney sweep will remove the surface buildup of creosote to limit the possibility of a chimney fire; however, the odors that have absorbed into the masonry itself are still left behind. Therefore, other actions must be taken to rid your home of the smell altogether.

Is negative pressure getting to you?

Air coming down your chimney is a symptom of overall pressure problems. This negative air pressure can cause odors to enter your home, no matter what the cause. Normally, as long as the draft is working correctly and there is no negative airflow in the home, the inherent smells will remain in the chimney. In the event that your chimney has developed a drafting problem, however, the intruding air brings the chimney odors right along with it as it comes down your flue. A quick solution to the negative air pressure issue is to simply crack a window at all times to let the pressure change through the window rather than the chimney.

Is Your Chimney’s Odor Putting a Damper on the Mood?

For a more permanent approach to keeping the smell that’s exuding from your chimney’s masonry inside the chimney and away from your nose, you need to limit the amount of air that’s able to come down your chimney and into your house in the first place. Closing your throat damper is a good start, however, most dampers aren’t perfectly sealed, so the problem may still occur. A top-sealing damper can help to minimize the airflow and accompanying unpleasant odors from coming down your chimney. In addition to limiting the airflow problems, the top-sealing damper will keep rainwater and moisture out as well.

There’s never a bad time to have your chimney inspected. Chimney sweeps are available year round to inspect and clean your entire chimney system. Why allow these smells to become a problem if you don’t have to? As soon as you first notice unpleasant odors coming from your fireplace, contact the chimney professionals at Magic Broom Chimney Sweeps right away. We appreciate your business and look forward to helping you keep your family safe and warm for many years to come!