How to Properly and Safely Remove Chimney Swift Nests

While migratory birds are beautiful to observe from afar, most homeowners do not want them taking up residence in their homes. Unfortunately, chimney structures tend to be the favorite nesting place of the chimney swift, a small, cigar shaped bird that migrates to North America from Peru each spring before returning South in the fall.

When homeowners hear birds or other animals in their chimneys, their first instinct is often to remove the nest as soon as possible. However, chimney swifts are a protected species, and because of that special considerations must be taken when planning their removal. 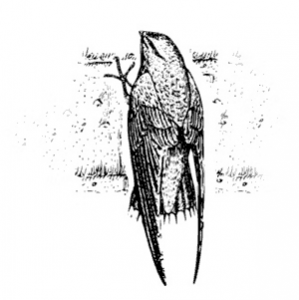 What are Chimney Swifts?

Chimney swifts are small, brownish-grey birds that can be found throughout North America during the spring and summer months. Known for their cigar-shaped body, chimney swifts are sometimes mistaken for bats due to their jerky and erratic flight patterns.

While these birds originally nested in hollow trees, expanding urban and suburban populations have caused them to search for new nesting sites. Because they are unable to perch or stand upright like other birds, chimney swifts are unique in that they build their nests vertically. Preferring dark, enclosed spaces, chimney swifts now make their annual nesting sites in chimneys, air shafts, or abandoned buildings.

Chimney swifts, along with several other species of migratory birds, are protected by the Federal Migratory Bird Treaty Act. Those who knowingly destroy nests containing eggs or young swifts can be penalized or fined under the law. Because of this, once a chimney swift takes up residence in a chimney structure, they often cannot be removed for several weeks as their eggs hatch and babies mature.

How to Remove Chimney Swift Nests

Because chimney swifts are protected under the Federal Migratory Bird Treaty Act, their nests cannot removed until the young have left. If birds are observed flying around or heard within the chimney, but no hatchlings are heard, the nest most likely has newly-lain eggs that will take up to 6 weeks to reach maturity. If hatchlings can be heard chirping inside the chimney, they should reach maturity in less than 4 weeks according to the Houston Audubon Society.

Although it may be disconcerting to hear their chirping from inside the chimney, once the birds have roosted there is little that can be done until the young leave the nest. For homeowners, the most important action to be taken is making sure the damper is completely closed. If not, swifts or their young may accidentally fall into the firebox itself. If this happens, contact local wildlife authorities; do not attempt to move or handle the birds yourself. Likewise, if the chirping from the chimney is too loud, homeowners can temporarily pack the bottom of the flue with insulating materials to muffle the noise. After the birds have left, the insulation can be removed before using the fireplace again.

Homeowners should never attempt to remove a nesting bird or other animal by starting a fire in the fireplace. While “smoking them out” may seem like a humane strategy, the heat, smoke, and fumes from a fire often injure or kill animals before they are able to escape.

How to Prevent Chimney Swifts from Returning

Because chimney swifts return to the same nesting sites year after year, a properly fitting chimney cap is the best way to prevent them from returning. The experts at Magic Broom [https://magicbroom.net/] will be able to safely remove any previous nesting materials left in the fireplace, as well as repair or replace a malfunctioning chimney cap.