The Difference Between a Chimney Cap, Chimney Crown, and Chimney Chase Cover 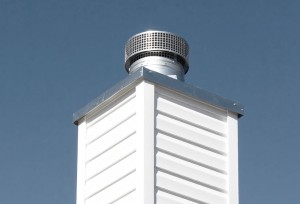 While most homeowners are experts at correctly operating their fireplaces, many do not know the proper terminology to describe the parts of their chimney structure. Likewise, because the chimney is difficult due to its position on the roofline, many never familiarize themselves with the anatomy of the chimney.

When it comes to the chimney, the cap, crown, and chase cover and often the three most widely confused terms. Although some people may use them interchangeably, these terms each describe a different and unique part of your chimney structure. Below you will find a discussion of the differences between a chimney cap, chimney crown, and chimney chase cover.

Chimney caps cover and protect the top of your flue. Typically visible from the street, chimney caps are made of metal such as stainless steel or copper, have slighted angles tops, and have wire or mesh on the sides. A correctly installed and undamaged chimney cap is extremely important as it keeps water, debris, and animals out of the flue.

Without a chimney cap, the flue is unprotected against the elements. Water can damage the interior of the chimney as well as the masonry, rusting metal parts such as the damper. Debris such as leaves, sticks, or blowing trash can fall into a clog an uncapped chimney, creating a fire hazard if smoke and gas are blocked from escaping. Finally, animals such as raccoons, roof rats, squirrels, and birds can use uncapped chimneys as nesting grounds, not just damaging the flue but also exposing your family to a wide variety of diseases carried by wildlife.

Chimney caps should be checked annually to ensure that they have not been damaged and that the seal has not been damaged. For homeowners looking to replace their existing chimney cap, there are a wide variety of styles available ranging from the inconspicuous to eye catching.

Even well-built or installed chimney caps may deteriorate over time due to regular wear and tear. Because they are directly exposed to the elements, chimney crowns are checked as a regular part of an annual sweeping or inspection.

Chimney chase covers should never be flat as this allows moisture to accumulate on the metal. This can lead to premature rusting; if you notice rust stains on the side of your chimney, it may be from a damaged chimney chase cover.

Understanding the nuances in chimney and fireplace terminology can be difficult; if you’re unsure what part of your chimney is causing problems, contact Magic Broom Chimney Sweeps today!