One of the best ways to avoid a chimney fire is to know the signs that one has started. When a chimney fire is imminent, homeowners may notice a loud, popping noise as well as dense smoke and a heavy smell. If any of these signs show themselves, it is important to put out the fire immediately and perhaps to have the fire department come and take a look. In any event, the fireplace should not be used again until the chimney has been inspected and cleaned. 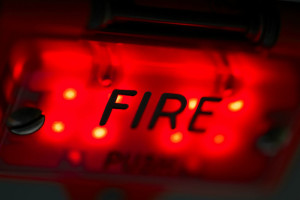 A great way to avoid a chimney fire is to clean the fireplace after each fire. The material left behind after a fire can sometimes stay hot enough to ignite for days. If just a small bit of this hot material blows back up into the chimney, it could start a fire that could potentially spread to the rooftop and even to the roof of a neighboring home. Sweep out the fireplace thoroughly after each fire, leaving only a very thin layer of ash behind for insulation. Store the swept out material in a metal container and dispose of it properly as quickly as possible.

Another simple way to avoid a chimney fire is to install a chimney cap. This inexpensive piece keeps foreign material out of the chimney. This includes everything from excessive moisture to animals that may set up their homes in the chimney. All of these things can allow debris to accumulate in the chimney, which could be extremely flammable and dangerous. This simple solution can prevent many chimney problems before they occur.

Having the chimney and fireplace inspected each year is an important part of avoiding chimney fires. A certified chimney sweep will be able to tell if there are any potential problems that could cause a chimney fire down the line. In addition, they can provide a thorough cleaning that will remove any potentially flammable material inside of the chimney, including creosote. This simply isn’t optional if you have a chimney.

No matter how many precautions a person takes, it is impossible to guarantee that there will never be a fire in the chimney. For this reason, it is important to make sure that the fire detector has working batteries and is functioning properly. This will help give the family immediate notice if a fire does start within the chimney.

A cozy fire on a cold winter night can quickly turn to disaster if a chimney fire starts. The best way to avoid a chimney fire is to recognize one at the very beginning and take the necessary steps to stop it. Make sure that the fireplace is kept clean so that flammable material does not make its way up into the chimney. To help prevent a number of issues, install a chimney cap and have annual inspections and cleanings by a chimney maintenance professional.